ARM has announced a 2mm x 2mm x 2mm (8.75mm3) glaucoma sensor that can be embedded in your eye. You can read the full write-up, along with a lot of computer architecture discussion, over at SemiAccurate.

Now I’m not going to be the first person in line to become a cyborg, but I’ve had a good idea where the world was headed ever since I read Vernor Vinge. If you’ve never heard of him, I’d recommend starting with Rainbows End

or A Deepness in the Sky

In short, we can expect that computers will become a part of everything around us. Further, it’s likely that computers will be built into our clothes and integrated with our bodies. Something as simple as a contact lens may become your primary interface to the Internet and the world. Imagine being able to exchange text messages just by thinking the words…

Today, I was contacted by several clients at a well-known university. A series of A/C and sprinkler issues apparently caused the complete loss of all equipment in their datacenter. I’m sure it was quite a surprise, quite a headache and potentially a huge disaster for their research. What would happen if the computer/server you rely on most was completely destroyed right now?

Don’t take anything for granted – you’ll never have complete control over your data and your systems. Maybe you can stand to lose some things, but if there’s anything you can’t lose make sure it’s backed up. And make sure the backup actually works. And keep at least one copy in a physically separate location.

I’ve spent a good deal of time working on my game project, but it hasn’t progressed quickly. I had a semi-playable prototype and decided it wasn’t right. I changed the fundamentals of the player’s character and realized the graphics engine was rudimentary. I replaced my home-grown graphics engine and collision detection with solid 3rd-party libraries: Ogre 3D and Bullet. Now I have a very simple prototype and haven’t decided where to go next.

A year ago I described my ideal game engine and explored the conflict between building a game or building a game engine. I still believe that good games are timeless, but after ~5 years I have to bow to the wisdom and experience of the experts. A game developer should not start by attempting to make their dream game.

END_OF_DOCUMENT_TOKEN_TO_BE_REPLACED

Today I turned on my first 1TB hard drive – I’m consolidating multiple systems into one to lower administrative hassle and reduce power usage. It’s striking to see that big, round number and a huge swath of free space. I’m excited at the possibility of keeping my data more organized, better protected and finally keeping the kids from destroying all our DVDs. However, I could have added these hard drives years ago – this is about the puniest computer I work on.

At work, we have systems with hundreds or thousands of cores and hundreds of terabytes of storage. I feel I’ve become jaded, as it’s been a long time since I was truly impressed by such numbers. Nevertheless, there are even larger systems being used by governments, universities and research labs.

I’ve come to realize that being envious of bigger hardware is quite childish. Almost all computers are under-utilized, so a good portion of the hardware is just going to waste. Particularly with home desktops and servers, the systems spend the majority of their time running idle. Rather than obsess over the several hundred dollar upgrade that would make your computer just a little faster, why not get something done?

When a square peg doesn’t fit into a round hole, do you blame the peg or the hole?

There are many responses to this sort of problem. I’ve witnessed several types of “problem personalities” when a person is confronted with a roadblock. Interestingly, these people may respond differently depending on what type of issue they’re confronting (social situation, technical glitch, etc.).

END_OF_DOCUMENT_TOKEN_TO_BE_REPLACED

RSH and RLogin aren’t that difficult to set up once you’ve gone through the man pages and done the installation a few times, but those first few times are a pain. They’re old and insecure, but still frequently used on small compute clusters. I get the impression that a lot of beginners get stuck fiddling with them for hours or days. They’re quite possibly the biggest stumbling block one faces when setting up a compute cluster by hand (setting /etc/hosts.equiv, setting /root/.rhosts, making sure the right flags are being sent to the rsh and rlogin daemons, etc).

Putting double negatives in your configuration file is not a good idea. When a setting this basic takes a couple seconds of thought, you’re doing it wrong. Were it something more complicated, administrators would be selecting the wrong option all the time.

Parents frequently need to discuss issues, but their kids rarely give them the opportunity to do so. Speaking freely is usually counterproductive, because you’re often talking about the kids (e.g. they’ll flip out if they find out you’re discussing whether they can have candy). But today I realized we’ve stumbled upon a method which actually helps the kids a lot.

Currently, we alternate between speaking Spanish and using large words (at least 3 or 4 syllables). It’s obviously beneficial for them to be exposed to multiple languages. And using large words not only gives my own vocabulary a workout, it’s great for the kids. After a few uses, our 3 year old is randomly using 4-syllable words in sentences. Now I’ll have to dig deeper for harder words, and he’ll pick those up too! There isn’t anything much cuter than hearing a 3 year old trying to say “complicated” or “detonation”.

This evening, NPR aired a report discussing the need to reduce our dependence on oil. One of the analyst’s comments began, “Whether you believe in global warming or not, oil is unhealthy for humans and the environment.” Those issues are too much for me to handle, but the way such topics are discussed is part of the reason they’re so difficult to address. The analyst was implicitly stating that beliefs, or feelings, are what determine the reality/myth of global warming.

It is incredibly frustrating when beliefs, or even organized religion, become tangled up in politics and policy making. Scientists discovered and improved every single method we use to extract energy. Scientists determined how to measure global climate, simulate events and provide weather predictions. Their research indicates that human activities are resulting in climate change. I’m all for finding fault in their methods and results, but it’s ignorant behavior to simply “not believe” their results.

One of the most fascinating examples I’ve encountered was filmed in the documentary Jesus Camp. A Christian mother is homeschooling her son using a science textbook from a Christian publisher. The textbook describes the false theory of global warming and details how to counter the arguments put forth in support of global warming. I can understand why some Christians feel the theory of evolution conflicts with their faith (although it’s quite possible to reconcile the two), but I can’t begin to imagine how global warming runs contrary to Christian teachings. 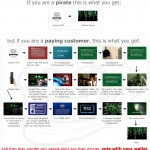 I recently described the pleasure available to anyone attempting to watch DVDs on a computer. Then I went out and purchased Star Trek. The media industry has been very reluctant to face facts, and it really seems they’re completely out of touch or just belligerent.

I have always been a big fan of the guys running Vendetta Online. They are one of the only indie teams I’m aware of that have successfully built an MMO game and turned a profit. What’s more, they seem to use the right tools for the job, know what they are doing, built a solid game and interact very well with the user community. I guess those are the keys to success for an indie MMO.

I’m at the stage where really I just need to use the right tools for the job. In most respects, I believe that good games are timeless (1 2) – I’m not concerned about a decade of development time. So I can take all the time I want and I’ve spent the last few years researching the right tools for scalable game development. Like the developers of Vendetta discovered, all roads lead to Erlang. It seems to have become the de-facto standard for highly-available, scalable, reliable applications. Engineers building an MMO would be foolish to not strongly consider Erlang for their backend. And all of Erlang’s strengths are based on a single premise: components should be simple, well separated and communicate through messages.